Each task in an RTOS-based application requires its own stack, the size of which depends on the task’s requirements (e.g., function call nesting, arguments passed to functions, local variables, etc.).

To avoid stack overflows, a developer needs to over-allocate stack space, yet not too much, to avoid wasting RAM.

What are Stack Overflows?

Just so that we are on the same page, below is a description of what a stack overflow is.  For the sake of discussion, it’s assumed here that stacks grow from high-memory to low-memory.  Of course, the same issue occurs when the stack grows in the other direction.  Refer to Figure 1. 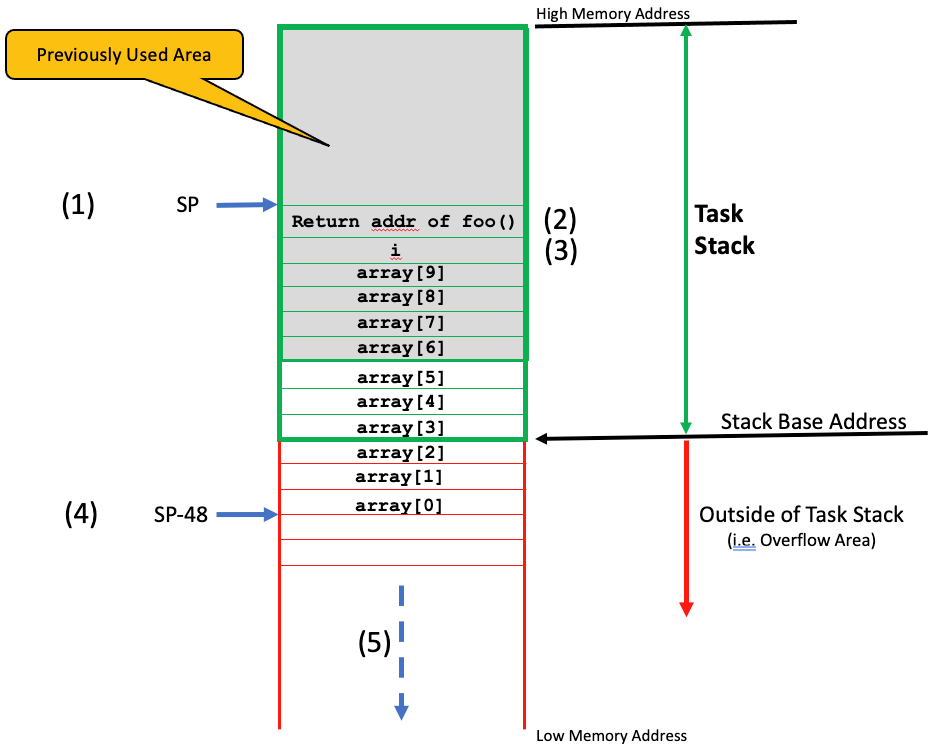 (1) The CPU’s Stack Pointer (SP) register points somewhere inside the stack space allocated for a task. The task is about to call the function foo()as shown below.

(2) Calling foo() causes the CPU to save the return address of the caller onto the stack. Of course, that depends greatly on the CPU and the compiler.

(3) The compiler then adjusts the SP to accommodate for local variables. Unfortunately, at this point, we overflowed the stack (the SP points outside the storage area assigned for the stack) and just about anything foo() does will corrupt whatever data is beyond the stack base.  In fact, depending on the code flow, the array might never be used, in which case the problem would not be immediately apparent.  However, if foo() calls another function, there is a high likelihood that will cause something outside the stack to be touched.

(4) So, when foo() starts to execute code, the stack pointer has an offset of 48 bytes from where it was prior to calling foo() (assuming a stack entry is 4 bytes wide).

(5) We typically don’t know what resides here. It could be the stack of another task, it could be variables, data structures or an array used by the application.  Overwriting whatever resides here can cause strange behaviors: values computed by another task may not be what you expected and could cause decisions in your code to take the wrong path, or your system may work fine under normal conditions but then fail.  We just don’t know and it’s actually quite difficult to predict.  In fact, the behavior can change each time you make changes to your code.

Whenever someone mentions that his or her application behaves “strangely,” insufficient stack size is the first thing that comes to mind.

How do you determine the size of a task stack?

The size of the stack required by a task is application specific but, it’s possible to manually figure out the stack space needed by adding up:

The IAR Linker has a neat feature which helps determine how much stack space each task will require.

As shown in Figure 2, you simply check boxes in the Linker’s configuration, build your code and examine the link map (.MAP file) to reveal the call stack depth (in bytes) for each function in your application.

You then note the task’s call stack size for each of your tasks because, we still need to add a couple of numbers to determine maximum stack size.

4) The stack space needed for local variables used by those ISRs.

The simple equation below can be used to determine the total task stack size (in bytes) needed for a given task and, adds an extra 33% to provide some wiggle room.

In fact, in most embedded applications, it’s desirable to keep run-time stack usage below the 70% mark. You can certainly be more conservative as needed by your requirements.

The stack usage calculation assumes that the exact path of the code is known at all time, which is not always possible.

Specifically, when calling a function such as printf(), it might be difficult or nearly impossible to even guess just how much stack space printf() will require.  Also indirect function calls through tables of function pointers could be problematic.

Finally, you should avoid writing recursive code because stack usage is typically non-deterministic (or difficult to determine) with this type of code.

Some RTOSs (specifically uC/OS-III and Cesium/OS3) allow you to monitor stack usage at run-time which you can then display using the RTOS awareness capability built into IAR’s C-SPY.

Check out Part 2, Detecting Stack Overflows in RTOS-Based Designs, or access the on-demand webinar, Tips and hints for better debugging your RTOS-based application.

Learn about developing RTOS-based applications and the benefits of...