Complete development toolchain providing one toolbox in one view, giving you one uninterrupted workflow. As a well established frontrunner in the embedded industry, you can rely on IAR Embedded Workbench to compile, analyze and debug your code in the most efficient way.

Supporting 32-bit RV32E and RV32I cores, as well as 64-bit RV64I cores. RISC-V extensions such as the C extension (compressed instructions), F and D (32- and 64-bit FPU), M (integer multiplication and division), A (Atomic), and the standardized parts of B (bit manipulation) are also supported, together with the Andes DSP and Performance extensions.

As the leading commercial tools supplier for RISC-V, we are able to provide worldwide technical support with our products. With a Support and Update Agreement, you also get immediate access to the latest updates and features.

When you buy a license of IAR Embedded Workbench for RISC-V, you get access to free training courses through our IAR Academy on Demand offering.

See latest version of IAR Embedded Workbench for RISC-V in action and learn how to get started with the toolchain in this video.

We are constantly updating and refining our tools with new features, new device support and extended capabilities.

Support for the following devices has been added:

In addition, the following RISC-V extensions are supported: C extension (compressed instructions), F and D (32- and 64-bit FPU), M (integer multiplication and division), A (Atomic), the standardized parts of B (bit manipulation), as well as Andes DSP and Performance extensions. 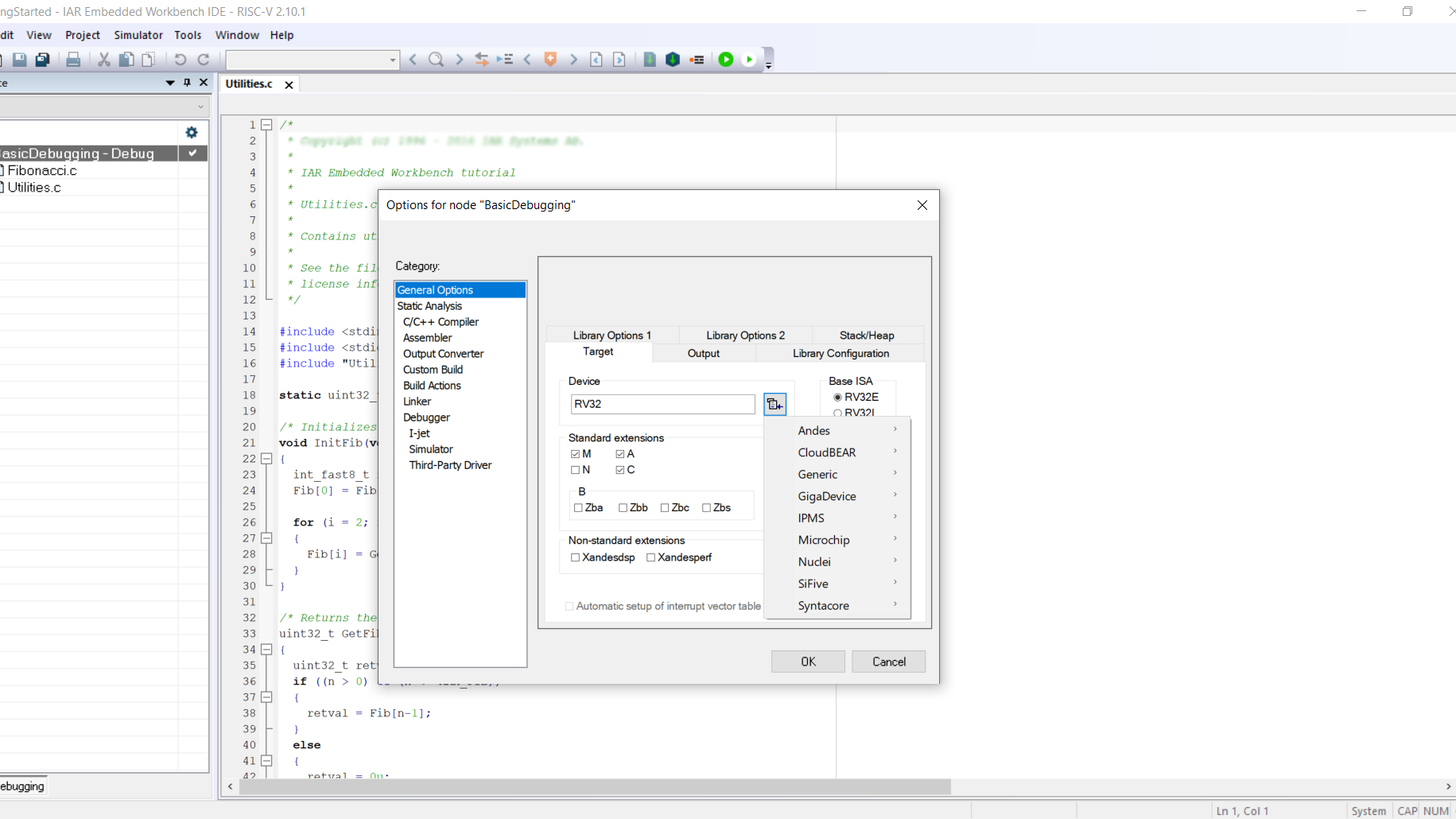 What type of license do you need?

Our tools are available in a flexible license model to suit your company needs. Together with our support and update agreements, you get the support you need in multiple time zones and multiple languages. Send a request for quote or contact sales to get started.

Want to know more about IAR Embedded Workbench for RISC-V?

We are available to answer any questions about our products. To help you make the most out of your experience, you can also find plenty of information in our Learn section and at the customer portal My Pages.

Do you want to contact us directly? Call your closest IAR Systems sales team.

Want a product demo? Our expert team of FAEs is available to help you.

Through our wide selection of articles and videos, learn tips on programming and coding as well as how to use our tools in the most efficient way.

Want to use this product in your development projects? Our sales team is here to guide you to the right solution for you. Complete this form and we will get back to you with a price quote tailored for your needs. We look forward to your request!

The IAR C/C++ compilers offer different dialects of the C and C++ programming languages, as well as different extensions specific for embedded programming (please note that not all language standards are supported for all target implementations). The compiler can be instructed to disable extensions for strict conformance to the standards.

A wide range of industry-standard debug and image formats compatible with most popular debuggers and emulators are supported. This includes ELF/DWARF where applicable.

The IAR C/C++ compilers adhere to a freestanding implementation of the following C programming language standards:

The ISO/ANSI C/C++ Compliance level varies between the different compilers. For complete information, please refer to the IAR C/C++ Compiler user documentation in your chosen product.

MISRA C is a software development standard for the C programming language developed by MISRA, The Motor Industry Software Reliability Association. Its aims are to facilitate code safety, portability and reliability in the context of embedded systems, specifically those systems programmed in ISO C.

The first edition of the MISRA C standard, "Guidelines for the use of the C language in vehicle based software", was produced in 1998. In 2004, a second edition was produced with many substantial changes to the guidelines, including a complete renumbering of the rules. Additionally MISRA C:2012 with extended support and MISRA C++:2008 for identifying unsafe code constructs in the C++ standard have also been added to the standards.

IAR Embedded Workbench features an add-on product C-STAT so you can check compliance with rules as defined by MISRA C:2004, MISRA C++:2008 and MISRA C:2012.

We use the following commercial test suites to test conformance of our tools to the standards: